The Vienna Furniture Museum owns one of the most comprehensive collections of furniture from the Biedermeier period. A further highlight, the so-called “Biedermeierkojen” or Biedermeier “cabinets”, which show interiors in their overall design, from then until now.

Emperor Franz II (I) reigned at a time of upheaval, unrest and radical change. The Napoleonic wars, the Congress of Vienna in 1814/15, the political restructuring of Europe, emerging nationalism, Metternich’s repressive policies, the incipient industrial revolution, the change from a feudal to a civil society – all this formed the highly explosive mixture that eventually erupted in the revolution  of 1848/49.

Interior design and furnishings also underwent significant stylistic changes. Napoleon’s expansion of power was accompanied by the dissemination across large parts of Europe of the stately Empire style created in his honour which drew on Greek, Roman and Egyptian antiquity. It was taken up in the apartments of the Viennese nobility and wealthy middle classes.

However, at the court of Emperor Franz, the Corsican’s main adversary, this style was only adopted in the apartments of his third and fourth wives. Alongside the neoclassical Empire style a related, but simpler and above all more homely furnishing style developed, which much later on, around the turn of the twentieth century, began to be referred to as ‘Biedermeier’.

For many years it was regarded as an authentically middle-class style of living and furnishing, born out of the desire of many people to retreat from the uncertainty of the times into a domestic idyll. However, it seems in fact to have originated among royalty and nobility, as a style conceived for the less formal private apartments in their stately residences. Today Biedermeier is commonly associated with adjectives such as ‘small-scale’, ‘cramped’, ‘pink-striped’ and ‘sprigged’. This is quite simply wrong. What was popular at the time was elegantly shaped seating, precious timbers, wallpapers with large-scale patterns and bold colours – quite different to the received staid and conformist image erroneously associated with the era. 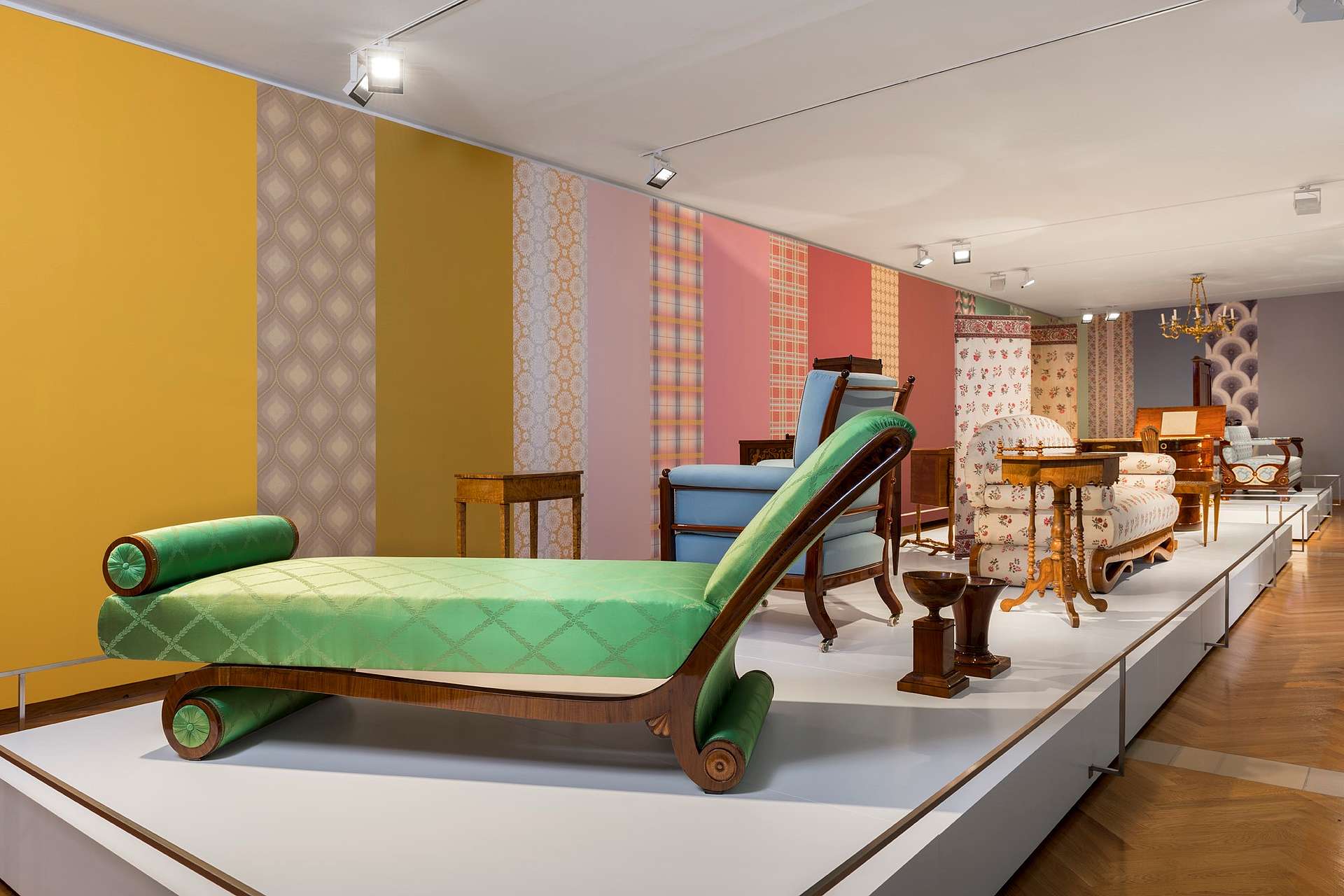 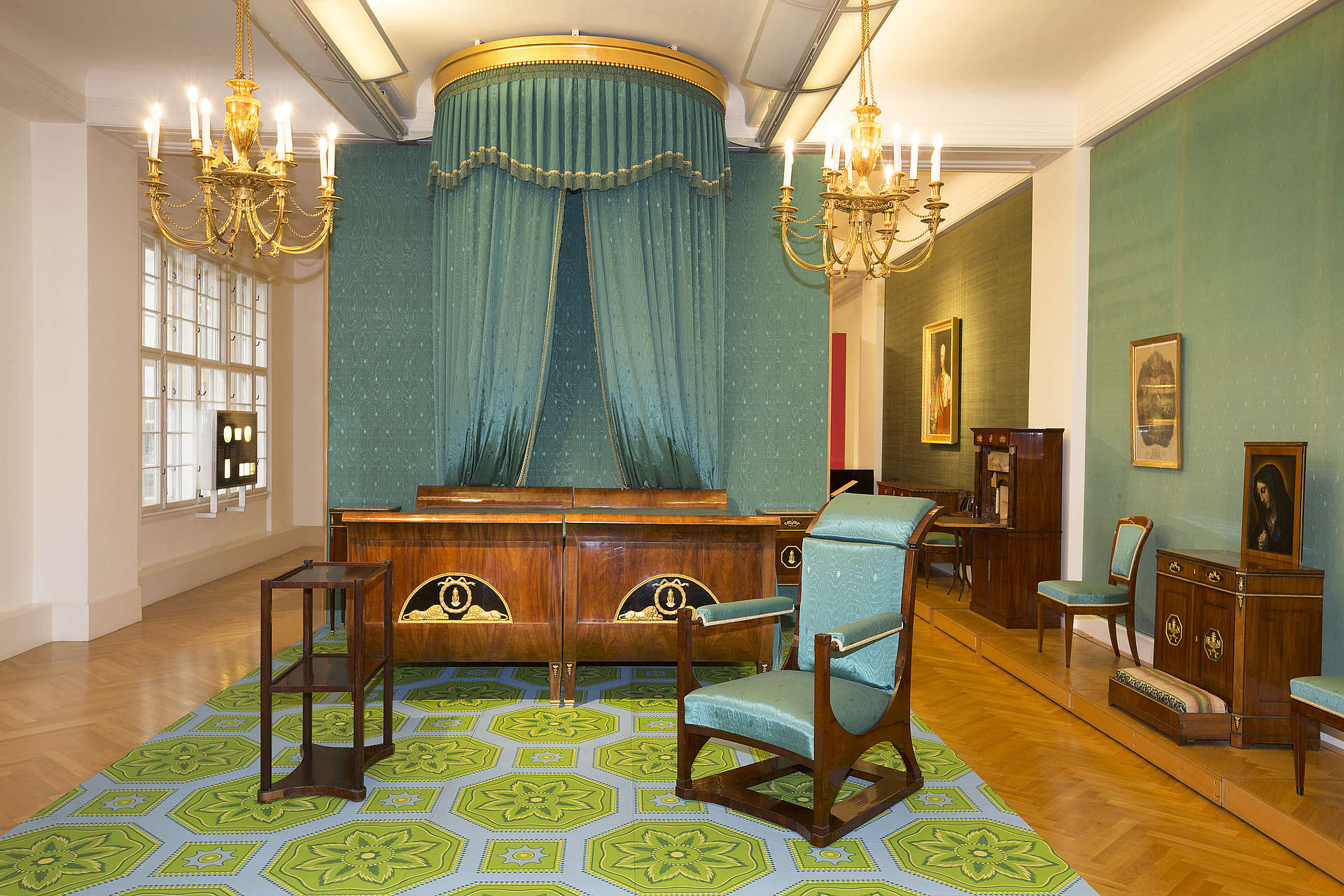 Bedroom of the imperial couple in the Vienna Hofburg. Vienna, c. 1816

The bedroom of Emperor Franz II (I) and his fourth wife, Karoline Augusta, was furnished in the Empire style. The fabrics (here reconstructed) in tones of green harmonize perfectly with the mahogany veneers and the gilt mounts on the furniture, the gold braid and fringing, and the gilded chandeliers. 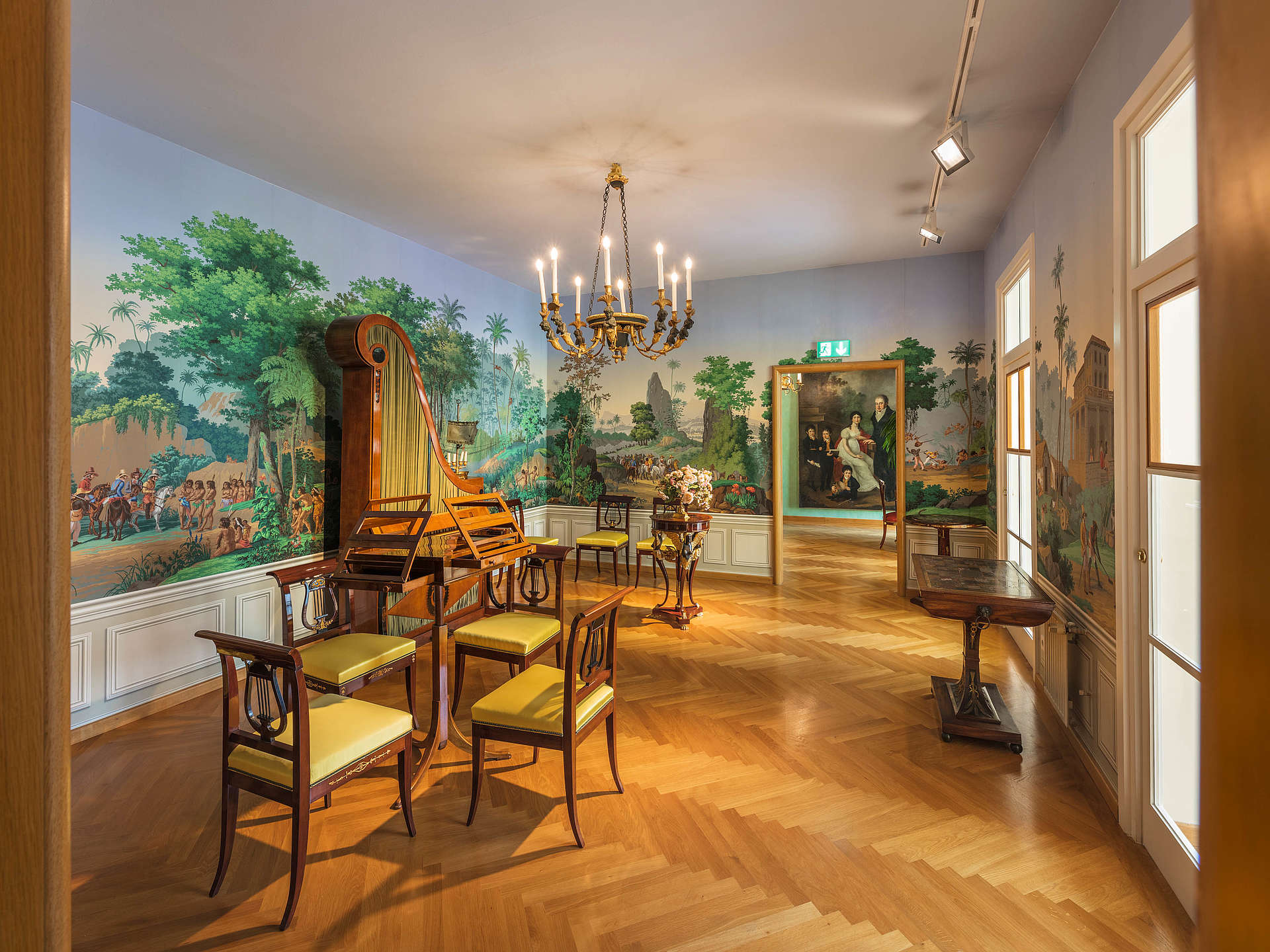 The Music Room with Empire furniture represents the great importance of domestic music-making and musical salons in Austrian society of the first half of the 19th century. The so-called giraffe piano, invented in Vienna, was a hammerklavier with a space-saving upright case. Regarded as the centre of the musical world, Vienna boasted almost 400 piano makers around 1815. 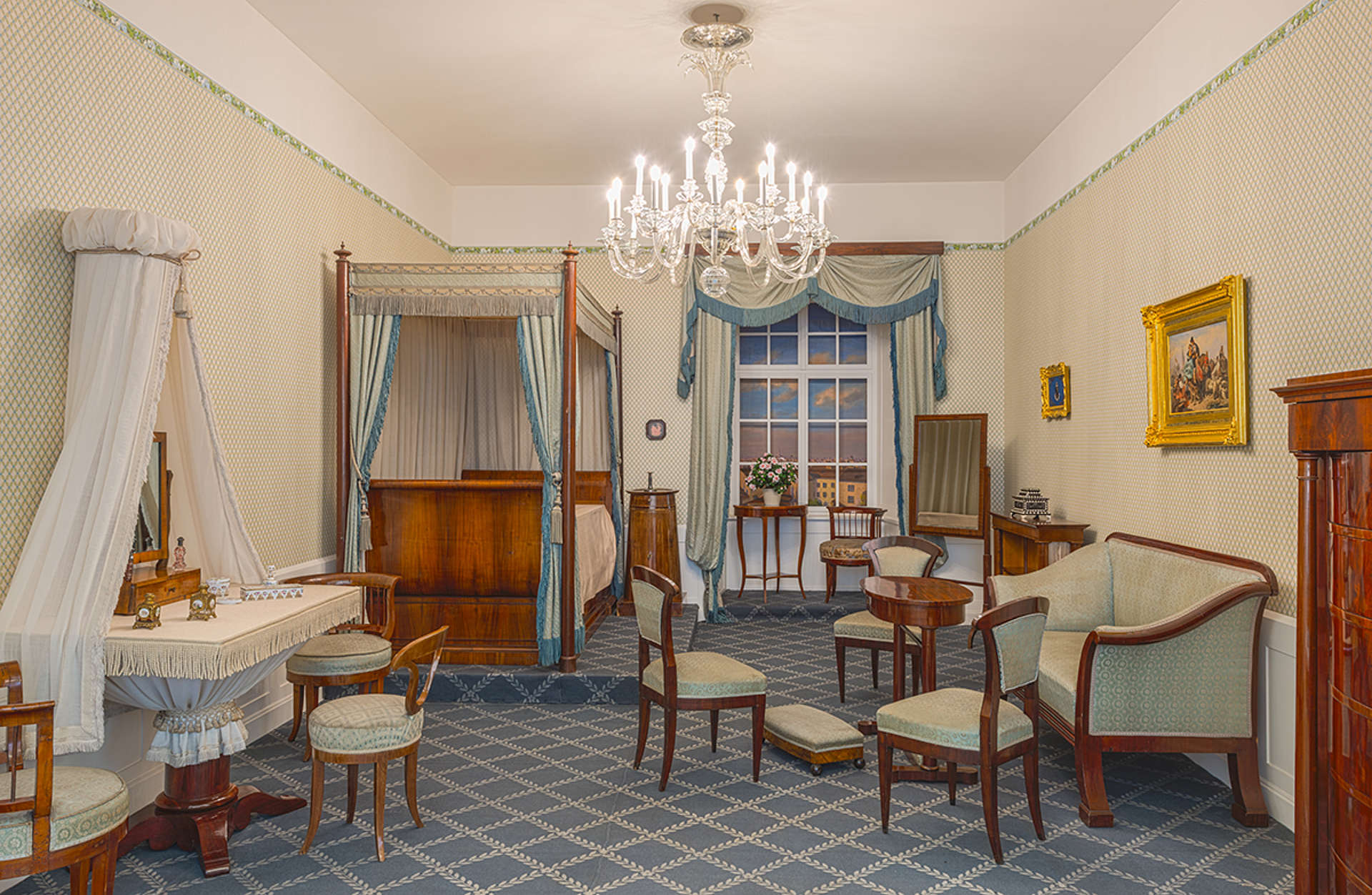 With the world’s largest holdings of Biedermeier furniture, the Imperial Furniture Collection presents both individual pieces and complete ensembles. These convey an instructive picture of typical Biedermeier interiors. Initially these ‘Biedermeier Period Room’ were intended first and foremost as objects of study for designers as well as a source of models for ordinary furniture-makers. 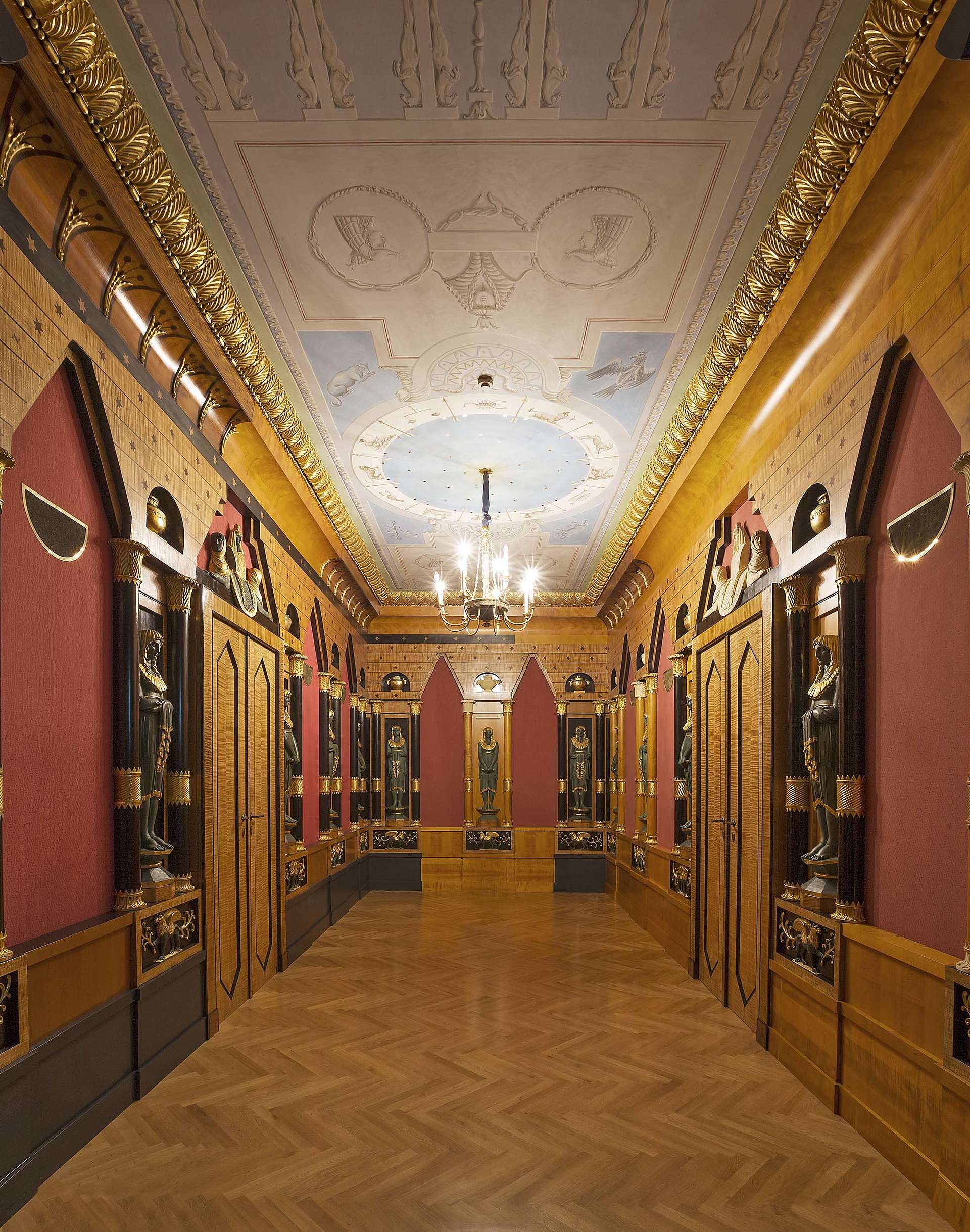 Napoleon’s Egyptian campaign in 1798/99 generated intense interest in the ‘Land of the Pharaohs’ all across Europe. Vienna was no exception. Empress Maria Ludovica had this ‘Egyptian Cabinet’ fitted out as part of her new apartment in the Hofburg, presenting a fascinatingly exotic ambience to the numerous guests whom she received during the Congress of Vienna. 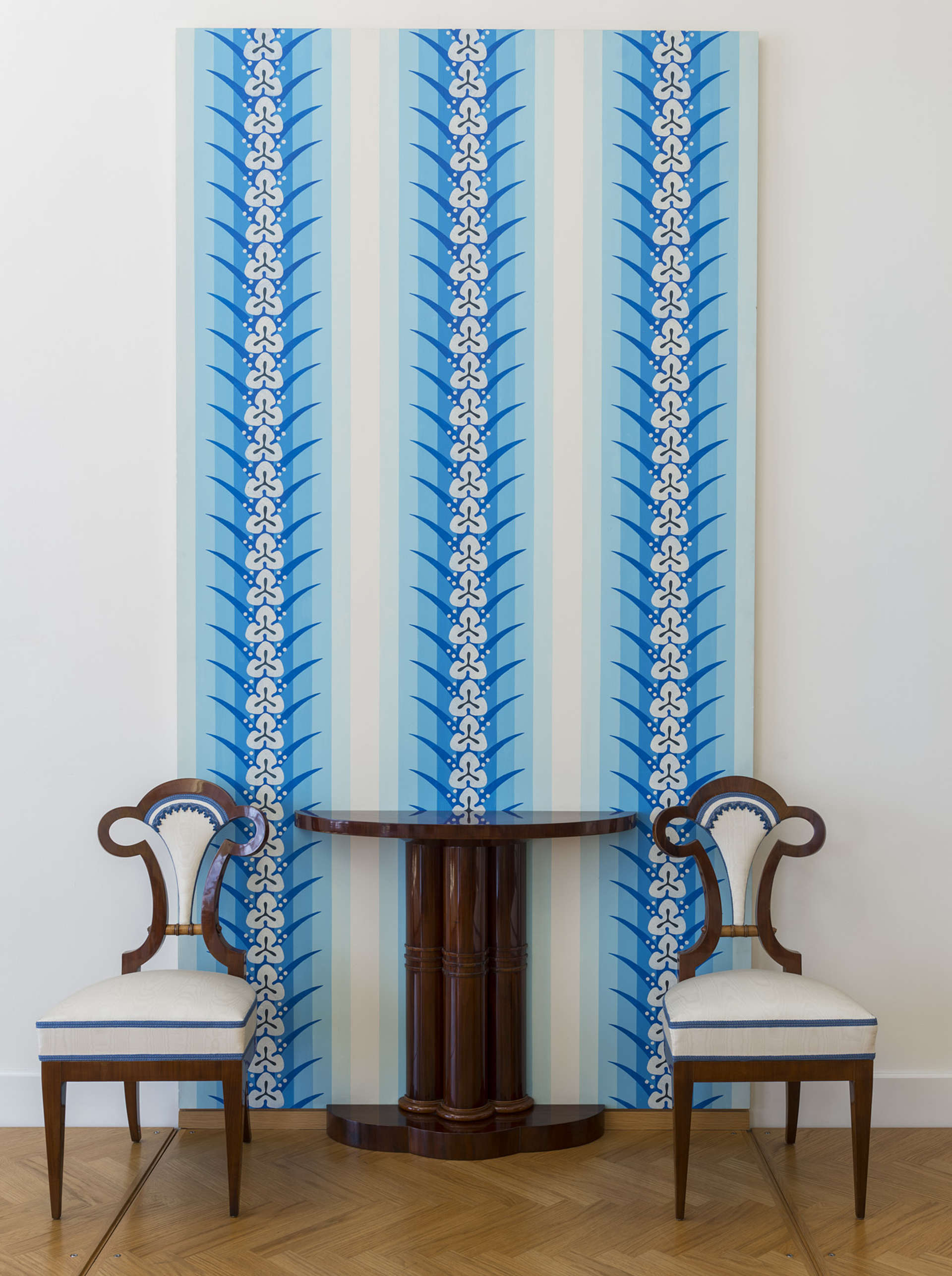 Furniture from the salon of Archduchess Sophie at the Blauer Hof in Laxenburg. Vienna, c. 1825

After the marriage of Archduke Franz Karl and Sophie of Bavaria, the parents of Emperor Franz Joseph, a summer apartment was furnished for them at Laxenburg. The mahogany furniture of the Music Salon exemplifies the very finest in Biedermeier style. The upholstery with its sophisticated combination of chamois and blue is echoed in the colours of the wallpaper.

Furniture from the Biedermeier and Empire

Here you can review and adjust the cookie settings used on the domain. Please note that we also provide cookies from US companies. If you allow these cookies, you are also consenting to possible processing of your personal data collected via these cookies in the USA (Art. 49(1)(a) GDPR).

This is relevant to the extent that, based on recent official decisions as well as case law of the Court of Justice of the European Union, the USA is evidenced as not having an adequate level of data protection (Case C-311/18, Schrems II). Here, it should be borne in mind that access by US authorities (FISA 0702) is not comprehensively restricted by law and does not require the approval of an independent body, and that no relevant legal remedies are available to data subjects in the event of infringements.

If you do not wish this to happen, please accept only necessary cookies.

We use Matomo to analyze the use of our website.