Discover furniture and interiors from the period of Historicism in the Vienna Furniture Museum.

During the Historicist era, when the Ringstrasse was constructed, Vienna witnessed a new flourishing of the arts, comparable to that of the Baroque age. From the middle of the nineteenth century, the magnificent new boulevard became a place where a whole epoch paraded itself in all its glory. The stylistic eras of the past were referenced not only in the grand public buildings and palaces but also their furnishings.

In the second half of the nineteenth century, interiors drew on earlier styles in an arbitrary ‘pick-and-mix’ of combinations. The Viennese court favoured the Rococo from the age of Maria Theresa, while the fashion among the city’s rising middle classes was for large, heavy neo-Renaissance or neo-Baroque furniture embellished with columns, Medusa’s heads and acanthus leaves, or gentlemen’s smoking rooms and dining rooms in ‘Old German’ style.

This often resulted in gloomy, cluttered rooms or bizarre excrescences such as ‘hunting rooms’ with furniture made from deer antlers. The Imperial Furniture Collection has a particularly impressive example of a late-Historicist interior in the Armorial Hall, a library conceived in homage to Emperor Franz Joseph.

Unaffected by the stylistic issues of Historicism, the cabinet-maker Thonet developed his famous bentwood furniture – ultra-modern products that were so far in advance of their times that his steam-bending techniques were later revived by the leading designers of the Viennese Modern movement. 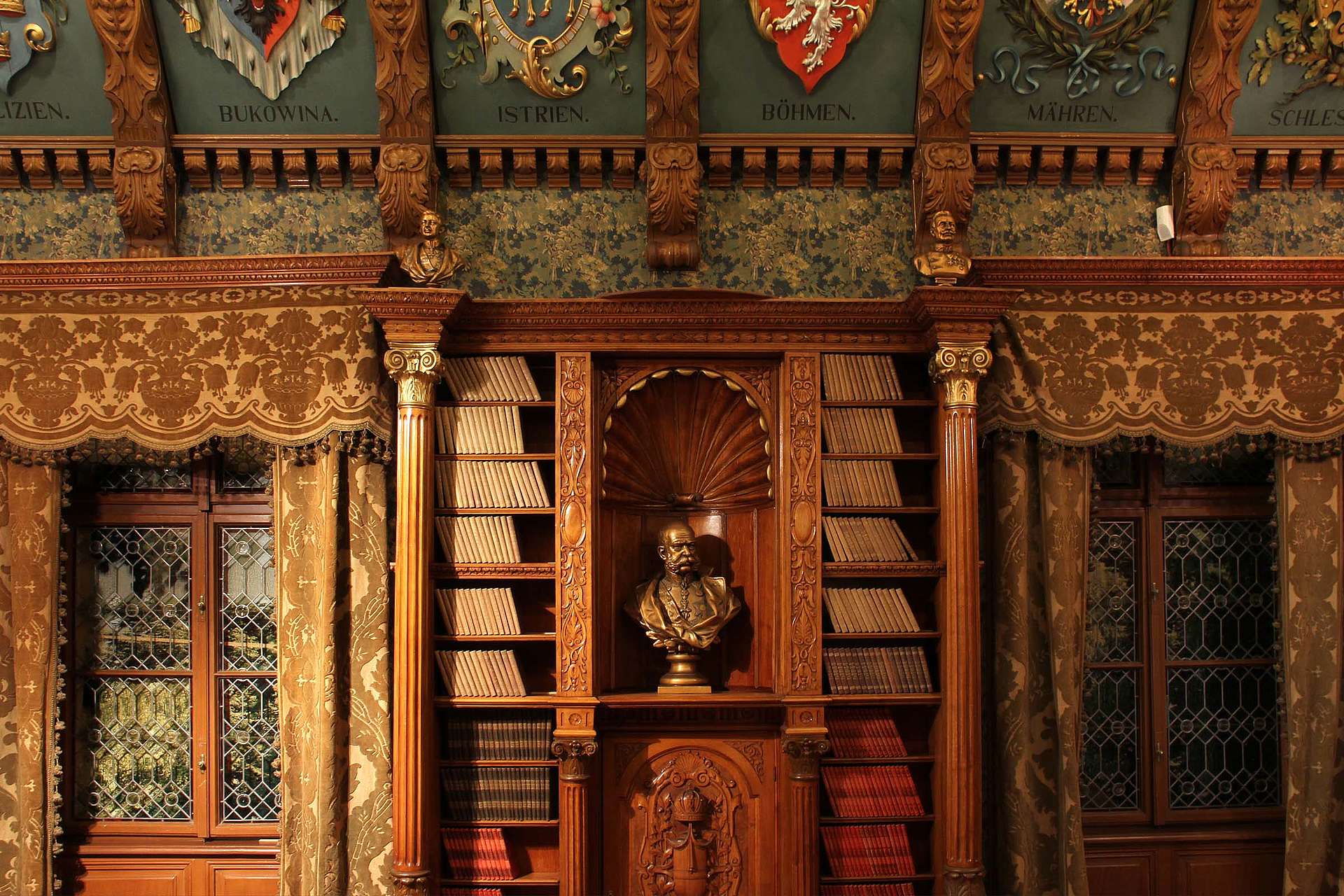 In 1993 the furnishings of this library from a middle-class villa near Mödling that was about to be demolished was acquired for the Imperial Furniture Collection as an example of a late Historicist interior. The ‘armorial hall’ was designed in homage to Emperor Franz Joseph. The arms of the Austrian Crown Lands embellish the pitched sections between the coffered ceiling and the walls. 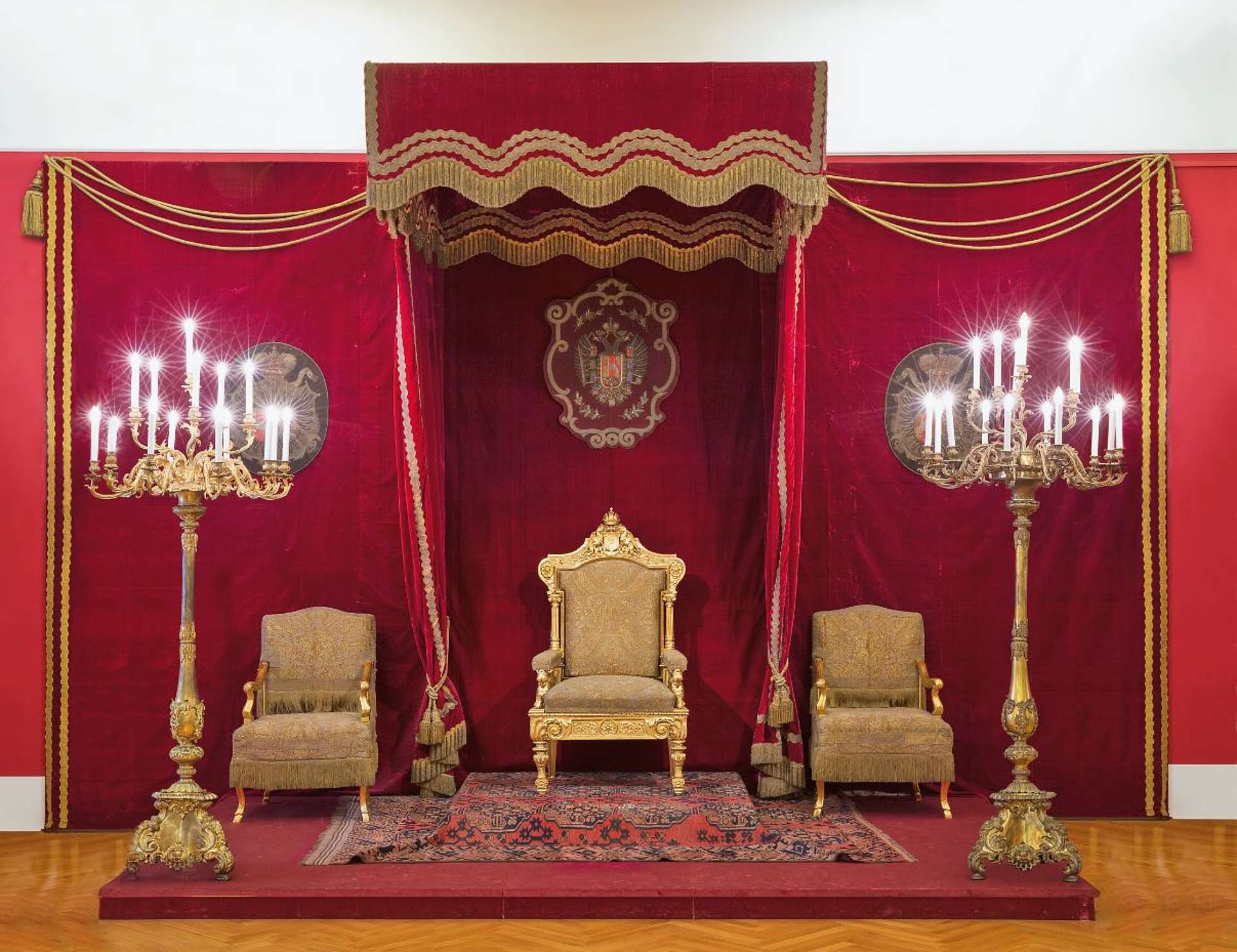 This throne served Emperor Franz Joseph as a piece of ceremonial furniture. Carved in Historicist style, its gilt frame and upholstery of gold brocade imbue it with a grandeur in keeping with its function. A throne had to be accorded the same obeisance as the ruler himself. Even when the throne was not occupied, one was not permitted to turn one’s back on it. 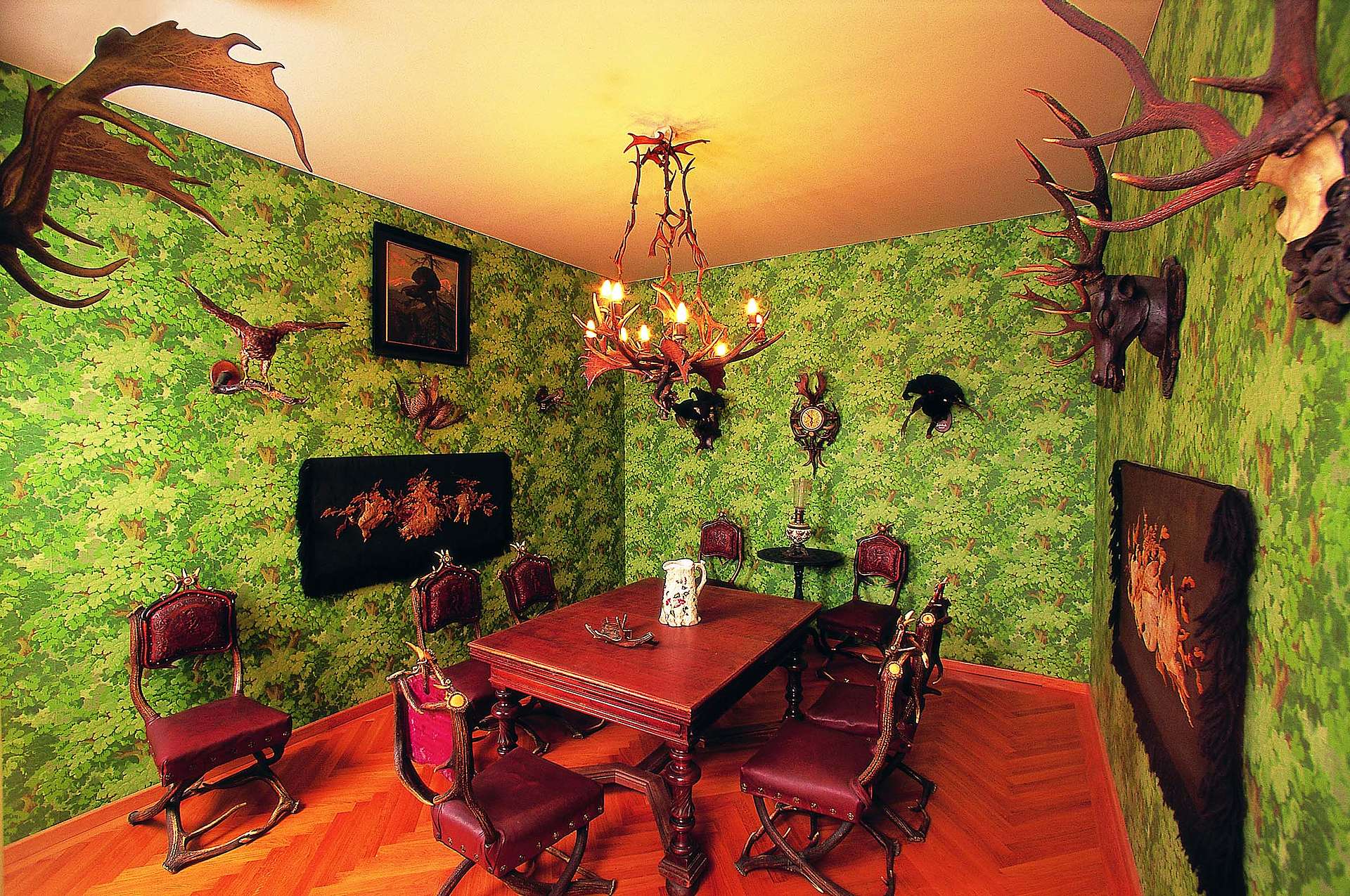 Long the exclusive privilege of the nobility, after the revolution of 1848 hunting also became a leisure pursuit of the wealthy bourgeoisie, and hunting rooms modelled on those of the aristocracy began to appear in the country houses of the middle classes. They were sometimes fitted out with furniture made of antlers, for which a special branch of the furniture industry developed. 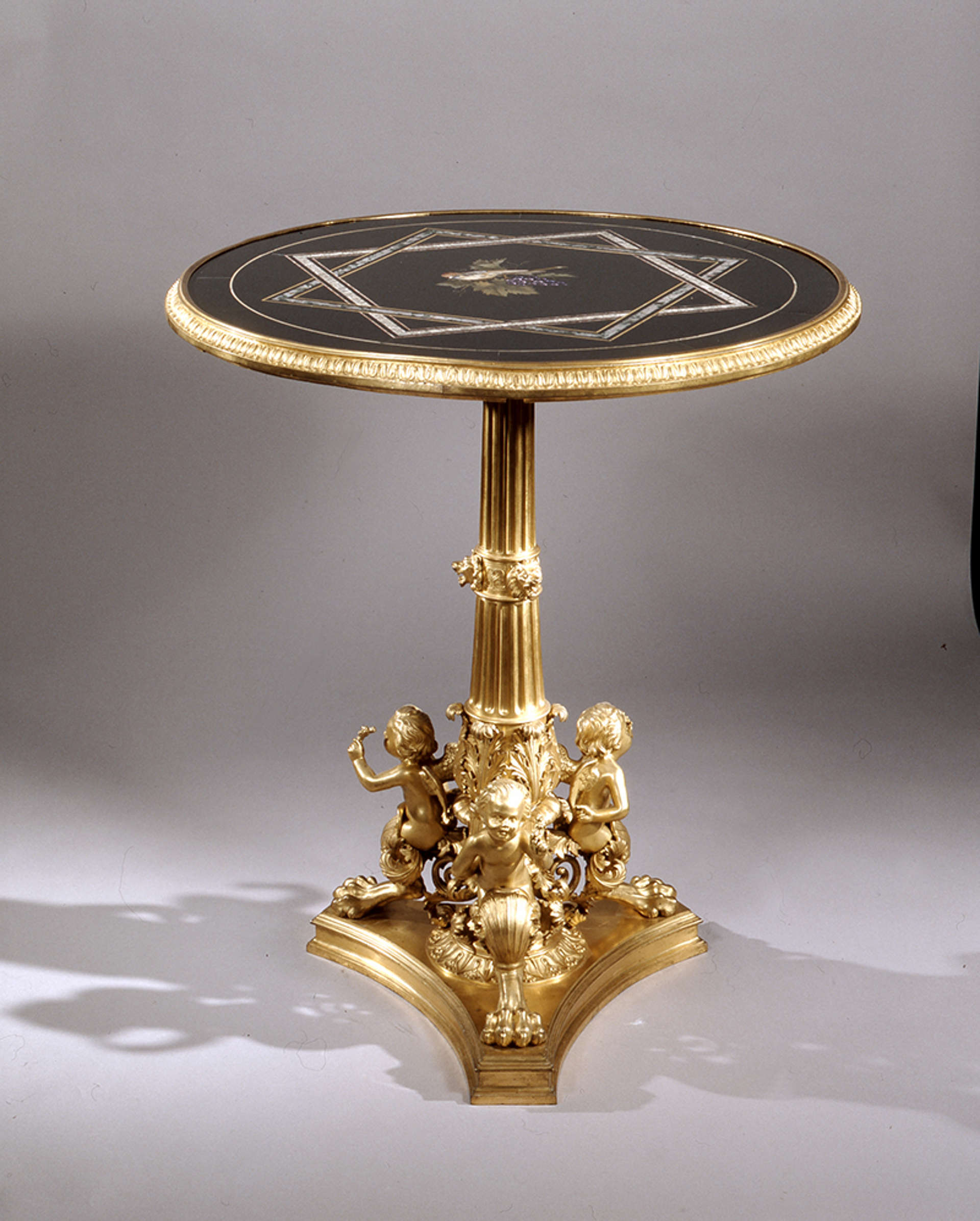 Designed by the architect Theophil Hansen, the Palais Ephrussi is one of the typical late 19th-century palaces on Vienna’s Ringstrasse. It was conceived as a total work of art in neo-Renaissance style, with the architecture and interiors co-ordinated down to the last detail. This small ornately decorated bronze-gilt table was part of the furnishings.

Chairs of this neo-Rococo model were in use at the court of Franz Joseph as general dining and occasional chairs. With its white paint, gilding and red ‘pineapple’ damask it displays the trio of colours typical of imperial interiors during this epoch. However, even today guests at gala dinners given by the Federal President of Austria also take their seats on chairs of this kind.

Here you can review and adjust the cookie settings used on the domain. Please note that we also provide cookies from US companies. If you allow these cookies, you are also consenting to possible processing of your personal data collected via these cookies in the USA (Art. 49(1)(a) GDPR).

This is relevant to the extent that, based on recent official decisions as well as case law of the Court of Justice of the European Union, the USA is evidenced as not having an adequate level of data protection (Case C-311/18, Schrems II). Here, it should be borne in mind that access by US authorities (FISA 0702) is not comprehensively restricted by law and does not require the approval of an independent body, and that no relevant legal remedies are available to data subjects in the event of infringements.

If you do not wish this to happen, please accept only necessary cookies.

We use Matomo to analyze the use of our website.