The gorgeously opulent world of Baroque and Rococo in the Imperial Furniture Collection! Now’s the time to discover exquisite showpieces once owned by the Habsburgs.

Short and puny – that was the appearance of Prince Eugene of Savoy, Austria’s famous Paris-born general. Maria Theresa on the other hand was a celebrated beauty in her youth, and later on a stately, even opulent woman. Whether on the battle field or in his magnificent state rooms, the prince wore an ancient greasy leather doublet marked with snuff stains; she loved rustling silks, precious lace and brocade.

As different as they were, one thing united them: their love of magnificent palaces and costly interiors, choice furniture and luxurious objets d’art.

On assuming the reins of power in 1740, in contrast to the extravagance of the French, who set the tone among European courts, Maria Theresa pressed for a policy of ‘frugal housekeeping’ as far as her own court household was concerned. But when it came to furnishing her residences she ensured that they reflected the dynasty’s standing in an appropriately magnificent manner. She also developed a passion for all things ‘Indian’ (i.e., Eastern Asian), in particular for Chinese and Japanese lacquerware that had become fashionable all over Europe.

At the Imperial Furniture Collection furnishings from the estate of Prince Eugene and the Viennese court with their characteristic curving lines, bulbous shapes and gilded mounts illuminate the glittering world of the Baroque and Rococo ages. This was an epoch marked by brutal wars and bitter struggles for power, but also by an elevated artistic sensibility and a highly aesthetic style of living. 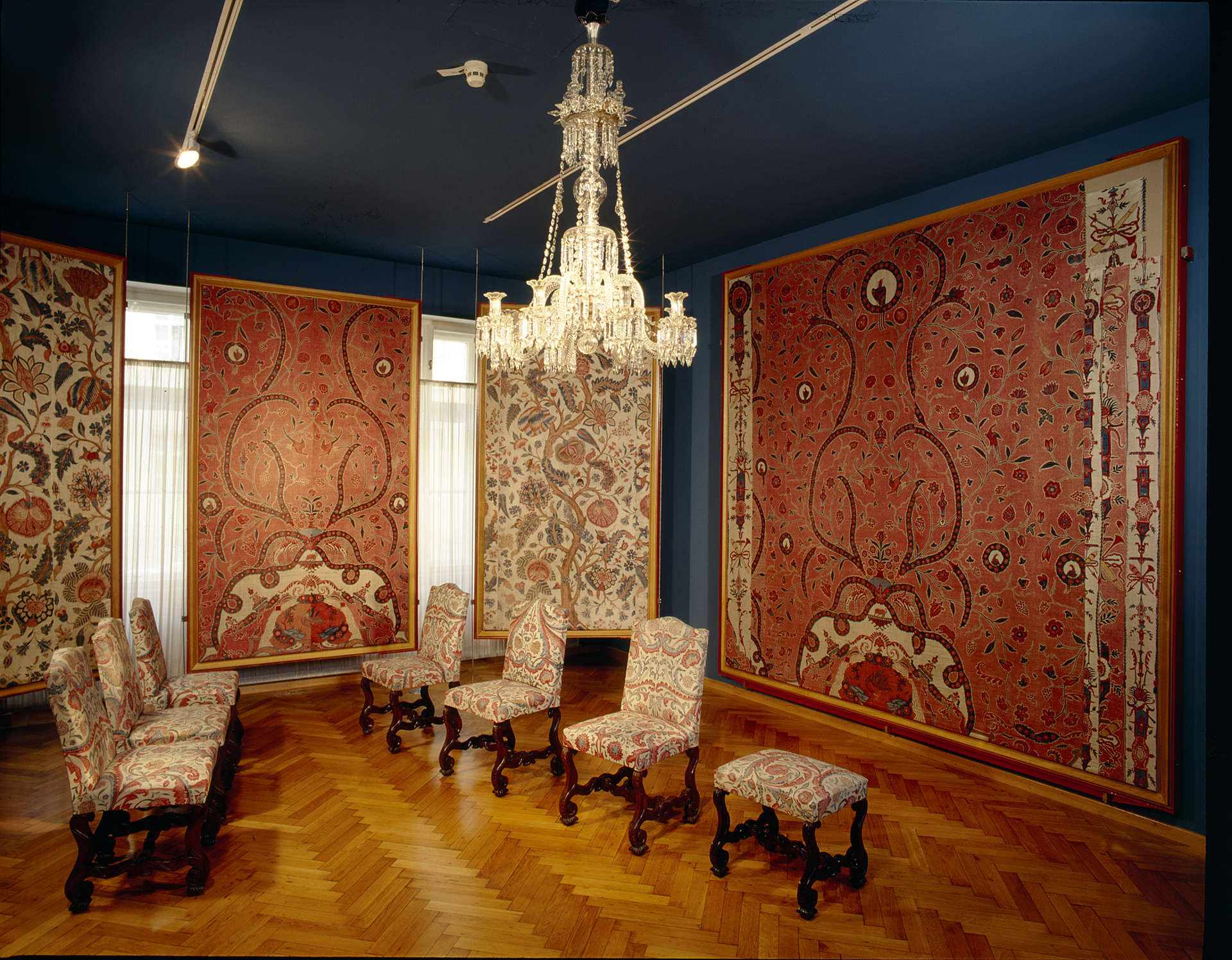 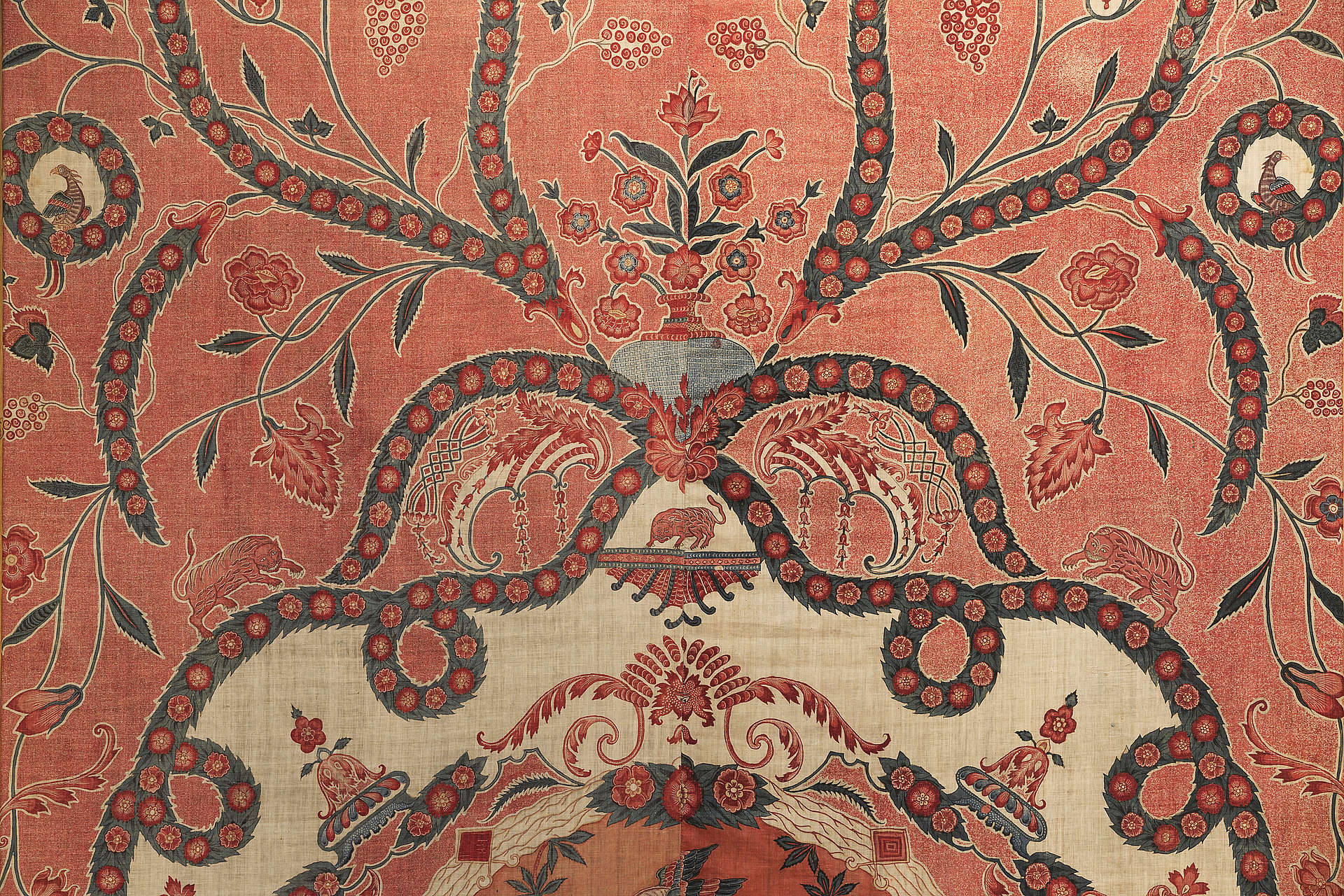 Having amassed a considerable fortune as a general in the service of the Habsburgs, Prince Eugene of Savoy had a country seat, Schloss Hof, built in the Marchfeld region of Lower Austria in the 1720s. Precious Indian chintzes – hand-printed or painted cotton fabrics with a wax finish – were used as wall hangings and upholstery, giving the rooms an exotic ambience. 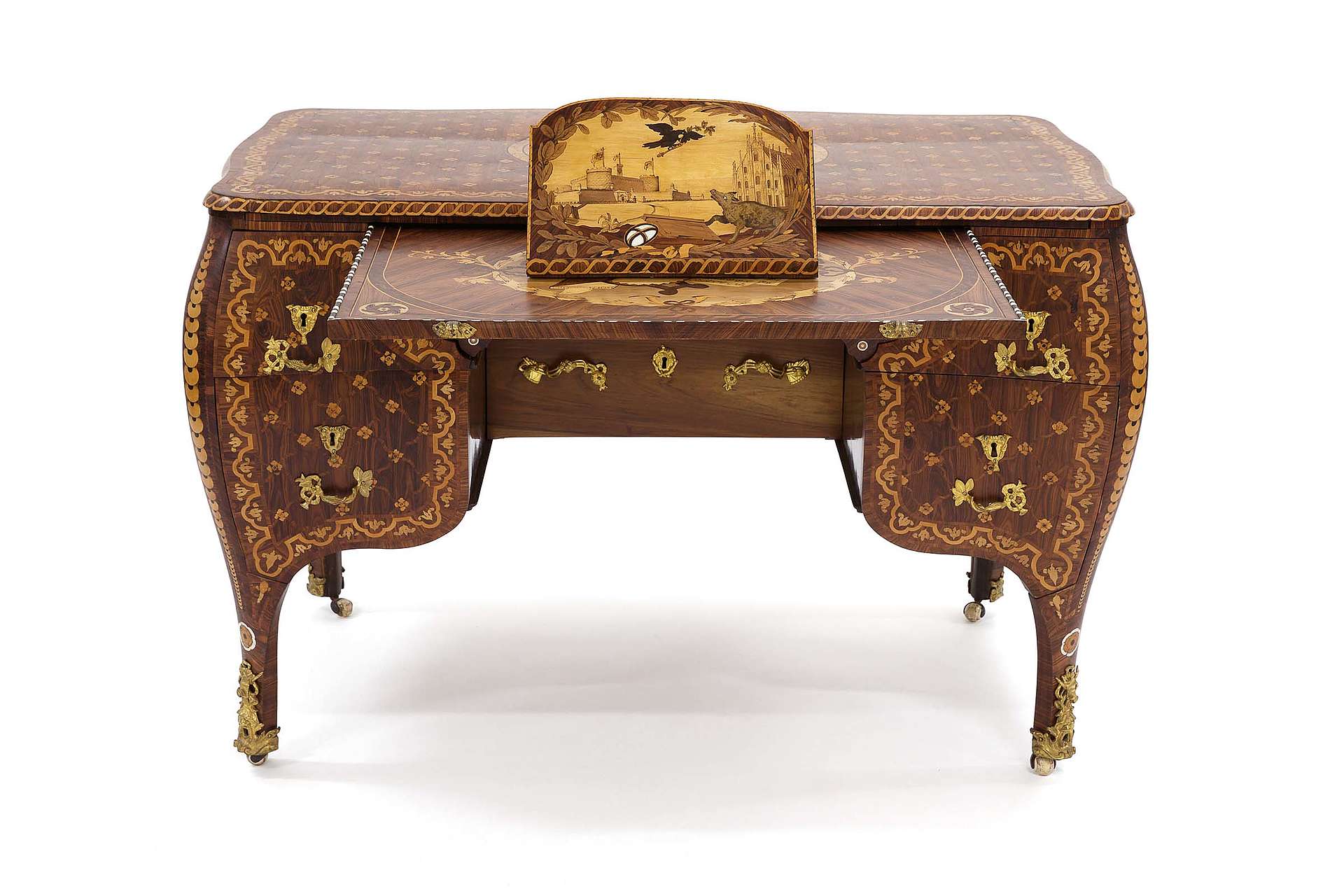 This writing desk was a gift to Maria Theresa from her son Ferdinand Karl, who was governor of the Duchy of Milan. Positioned stylistically between the Rococo and neoclassicism, it was made by the Lombard cabinet-maker Giuseppe Maggiolini. He was renowned for his elaborate marquetry work using a wide variety of timbers. 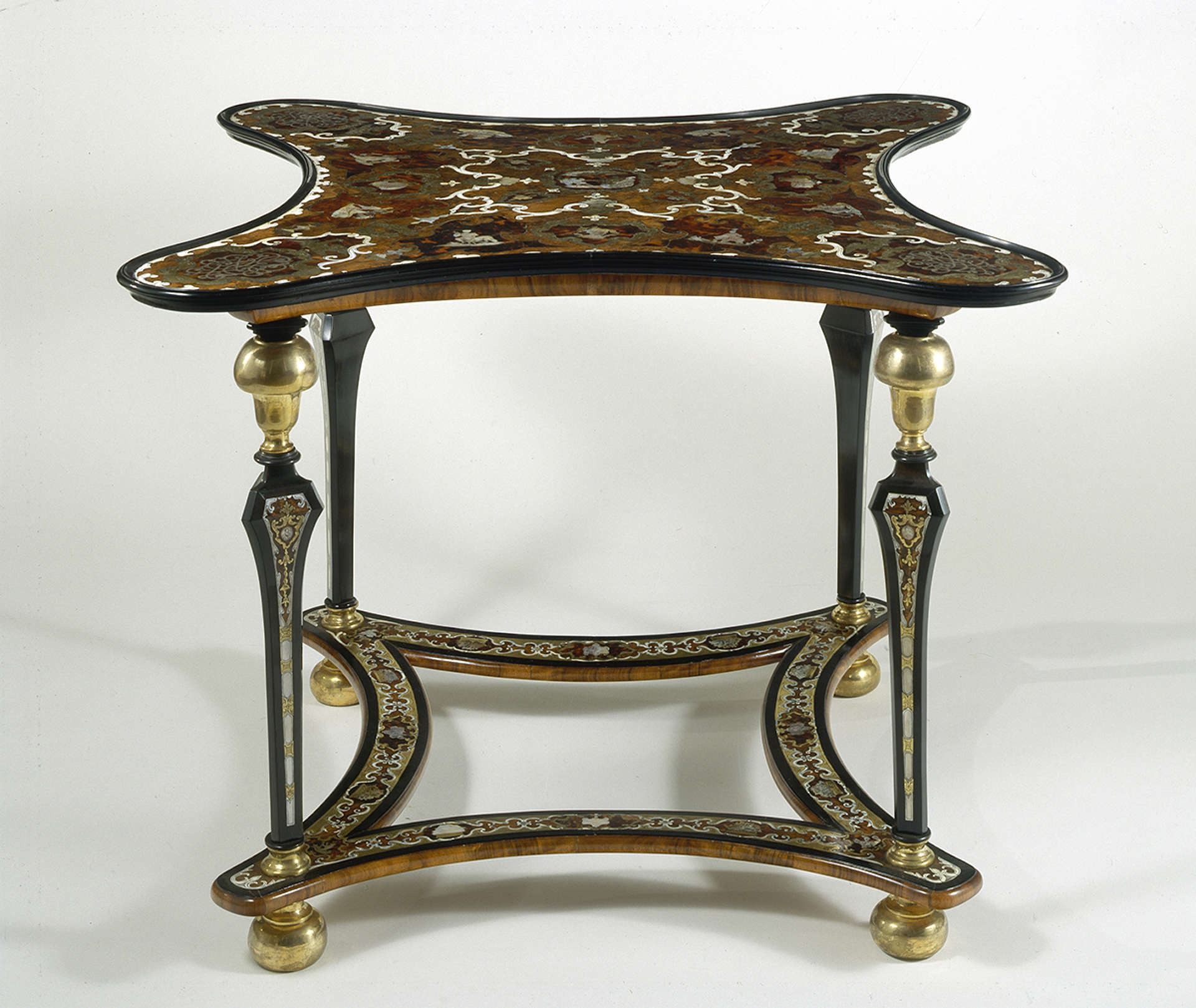 This table was probably made as a wedding gift for the future emperor Charles VI and Elisabeth Christine of Brunswick-Wolfenbüttel, and is thus fittingly elaborate, with Baroque forms in stained black pearwood with a panel inlaid in so-called Boulle technique. Games of chance were a typical entertainment at the Viennese court. 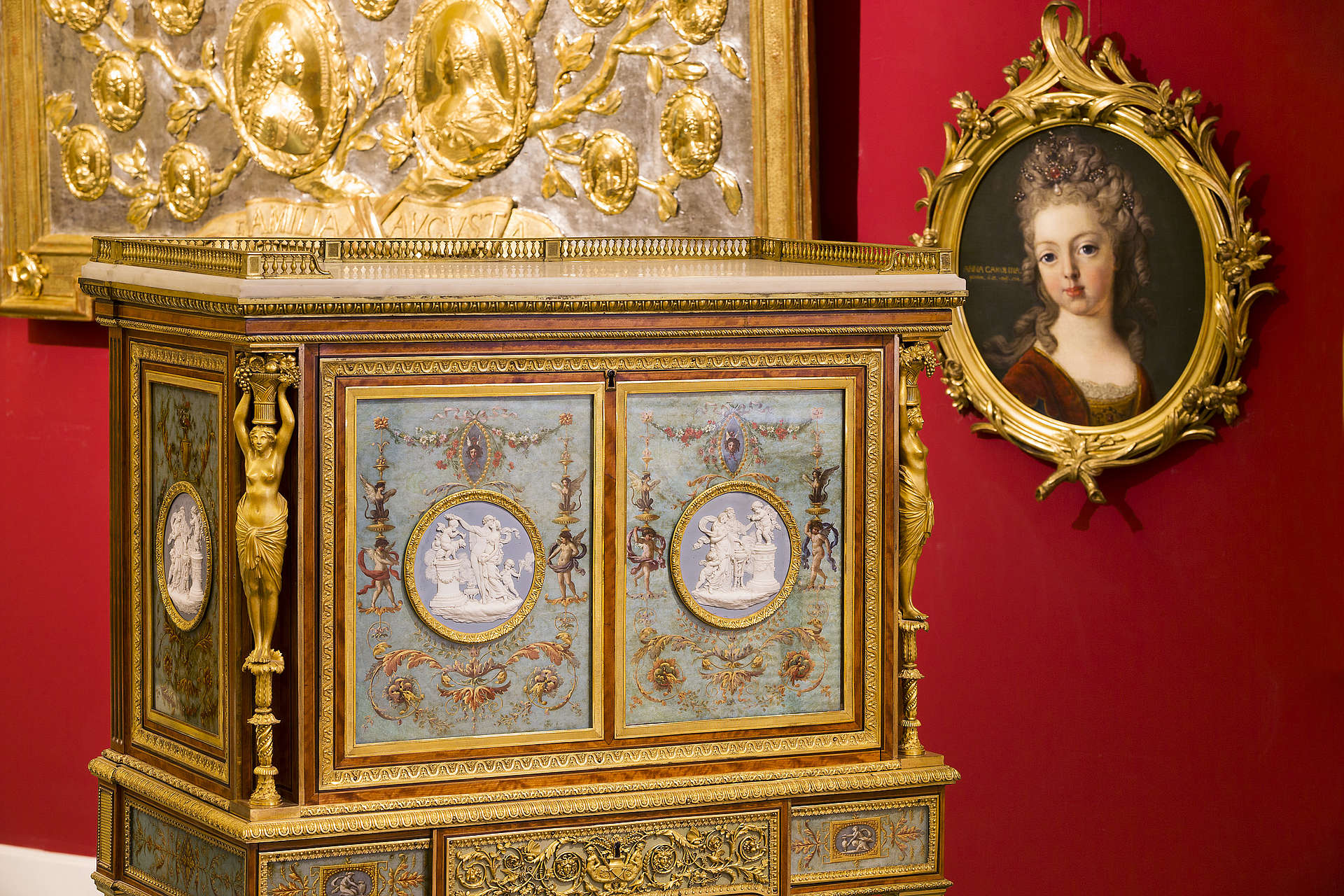 Marie Antoinette, Maria Theresa’s youngest daughter and wife of the French king Louis XVI, cultivated a markedly luxurious lifestyle. One of the cabinet-makers she commissioned to make furniture was Adam Weisweiler, who created this graceful secretaire decorated with ormolu mounts and medallions of biscuit porcelain. 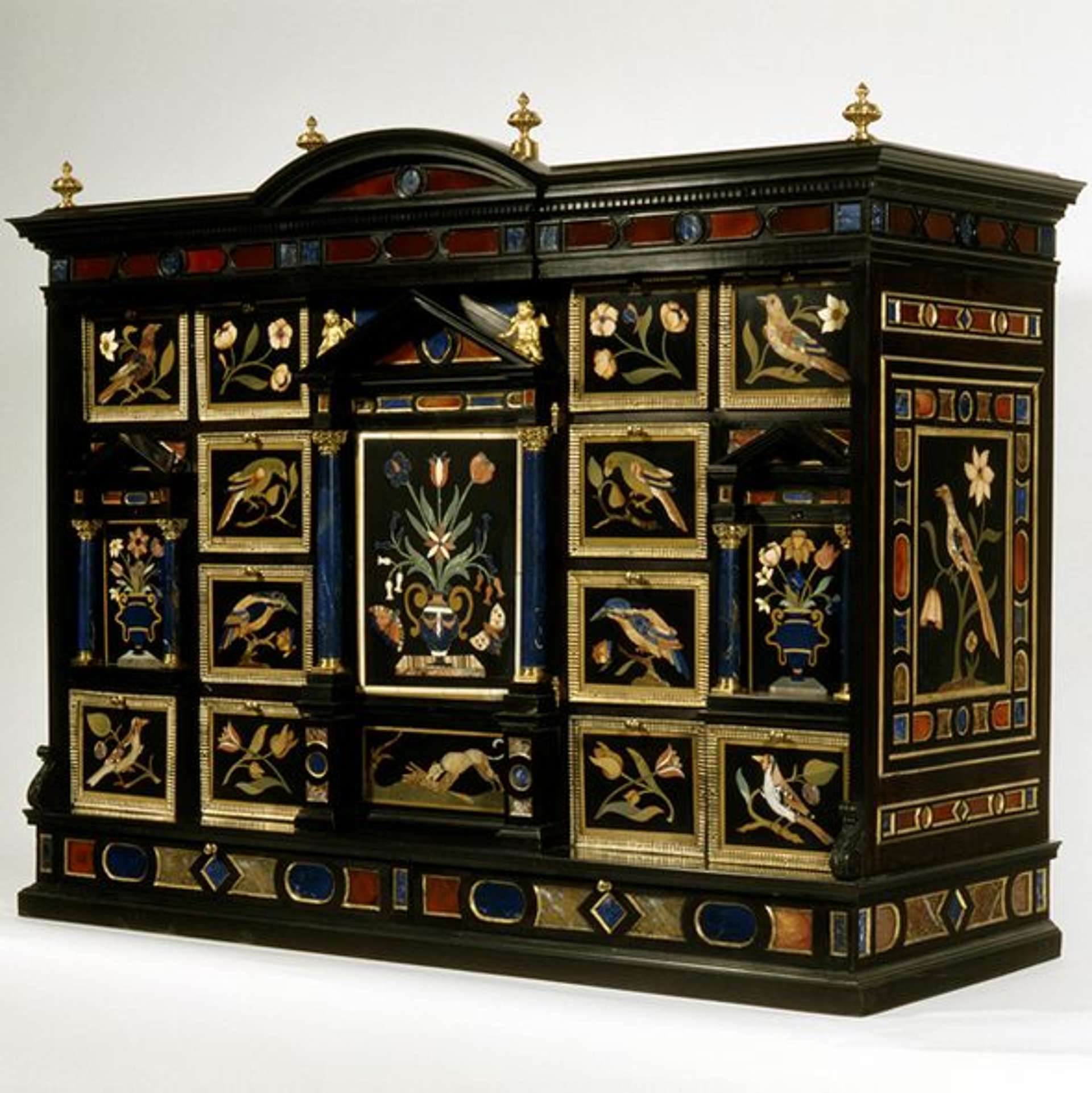 In keeping with a fashion that was widespread in Europe during the Rococo, Maria Theresa had a fondness for ‘Indian’ objets d’art, by which she meant porcelain and East Asian lacquerware or its imitation. Japanese lacquerware like this cabinet decorated in so-called ‘taka-maki-e’ technique with raised gold work on a black lacquer ground was especially highly prized.